1044. The Curious Case of Benjamin Button

The Curious Case of Benjamin Button
2008
Directed by David Fincher 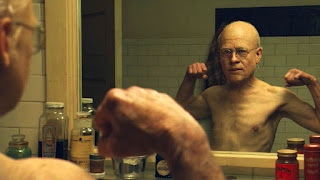 I knew the premise of this story (who doesn't?) and I thought I could pretty easily map out the plot. It didn't seem worth it to sit through a nearly three hour movie when I knew what was going to happen, but hey, Brad Pitt is hot and the List told me to.

Benjamin Button was born with the appearance of old man, but thankfully not the dimensions. His mother still dies giving birth to him, and his father abandons him on the doorstep of a nursing home. He is taken in by Queenie, a woman who works at the nursing home. He ages backwards and is unfortunate enough to fall in love.  You can imagine how well that turns out.

It is super strange to me that this was adapted to be such a serious drama. It's like if Gogol's The Nose or Roth's The Breast were made into epic romances. The somber mood is not entirely successful. I felt like the movie was trying to come up with some great truth that could be observed from Benjamin's story when really, there wasn't one. I mean, aging is the one thing that unites us as life forms; no one is immune to its horrifying progression. What could a character removed from that possibly teach us?

Anyway, it's still a beautiful movie. The performances are incredible (I love my girl Taraji Henson) and I was properly impressed by the special effects. Still, I don't think it deserves a place on The List.

Brad Pitt has said it took five hours every day to put on the make up on required for the role.

Originally was going to star John Travolta. Well, that's a relief.
Posted by Amanda at 12:08 PM