O Brother, Where Art Thou?
2000
Directed by Joel Coen 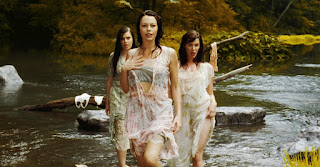 Finally, a Coen Brothers film that I am on the fence about. Usually I either love it (who couldn't love Fargo?) or hate it (The Big Lebowski...White Russians are disgusting by the way). I'm still not sure about this one, but at the very least it was interesting.

Three convicts, Ulysses, Pete, and Delmar, escape from a chain gang. Ulysses claims he hid stolen loot in the area before it was flooded. They set out to find the treasure, meeting many colorful characters along the way, including a one-eyed bible salesman, a young black man who claims he sold his soul to the devil, and Baby Face Nelson.

When this movie began, I was convinced George Clooney was miscast. That man belongs in a suit, dammit! But as the film progressed, I became more and more charmed by the characters. Certain moments of the movie were more effective than others; I loved the Siren scene and the Klan meeting was genuinely frightening. Other scenes like the one with Pete's cousin felt unnecessary.

I guess my main problem with this is that it didn't feel cohesive. It was hard to know where we were in the story but I suppose the Odyssey was episodic. Sidenote: am I the only one who inwardly groans when John Goodman shows up in a movie?

The Coen Brothers admitted they never read the Odyssey. Well, that figures.

George Clooney's singing voice was dubbed by Dan Tyminski. I knew it was too good to be true.
Posted by Amanda at 2:32 PM