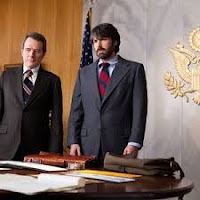 I want to start by saying that I understand that artists can take some creative license with their work.  Still, the way the filmmakers totally minimize Canada's role in this operation irritates me. Not to mention the fact that Ben Affleck plays someone of Mexican descent. No wonder the rest of the world hates us.

On November 4, 1979 Iranian activists stormed the U.S. embassy in Tehran in retaliation for President Carter's giving the shah asylum during the Iranian Revolution.  Six of the staff managed to avoid capture by hiding in the home of Ken Taylor, a Canadian ambassador.  The United States' government attempts to come up with a plan to get the escapees out.  They bring in Tony Mendez, a CIA exfiltration specialist, for consultation.  He develops an audacious plan: pretend that the escapees are Canadian filmmakers who are scouting locations in Iran for a sci fi movie.

I have never been overly impressed with Affleck's acting abilities, but fortunately, he was perfectly acceptable here.  He shone more as a director; I was impressed by the 70s vibe I got from this film.  I felt like I was watching All the President's Men (with less sexy leads of course).

So overall, a decent film and the best we have seen on this blog in awhile.

First film in 23 years to win Best Picture and not be nominated for Best Director.