The Artist
2012
Directed by Michel Hazanavicius 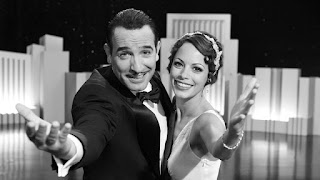 I want to preface this review by saying that I actually did enjoy this film.  But really, how out of touch are the Oscars that they would crown a silent black and white movie Best Picture?  Most people I know refuse to watch black and white films, let alone silent ones.  I'm not saying we should mindlessly cater to the masses, but this is a little bit ridiculous.

George Valentin, a popular silent film star, meets Peppy, a beautiful young dancer, in an insanely adorable way.  Valentin helps to make Peppy a star, but his own career begins to fall apart with the emergence of talkies.

I don't usually describe films as cute, but this was undeniably cute.  Also undeniably relevant, as the film industry continues to change; I keep reading scary online articles about how Hollywood as we know it is dead.

Still, I don't think this would attract the interest of the average movie goer, but I'm a huge snob so I'm fine with it.

Shot in color then converted to black and white.