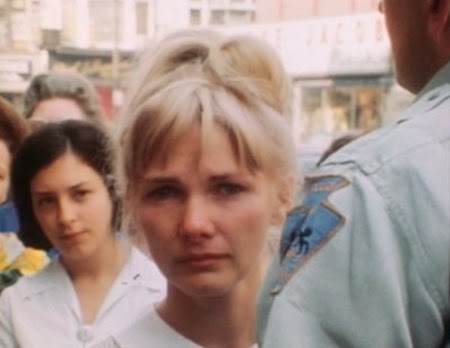 I finally was able to find this film by exploring the darkest corners of the internet.  The copy I found could not be paused or fast forwarded.  About three-quarters way through the movie it stopped working and I had to start the entire thing over since I couldn't go back to where I was.  I didn't even want to see this movie once!  Ugh.  Let's just get through this.

Wanda is a very troubled woman who abandons her children, saying they will be better off with their dad.  She then ends up in several abusive relationships, including one with a bank robber.

I am not really sure what the point of this movie was?  Surely we were supposed to sympathize with Wanda, but she has got to be up there as one of the most annoying movie characters.  I am not even condemning her for leaving her children.  I am more irritated by her behavior at the restaurant.  Hands off other people's plate, bitch.  Good god, what does that say about me?

So for an hour and a half we have to follow around depressed woman making stupid choices.  You would think (or hope I suppose) that a female director would be a bit more progressive.  Definitely not the worth the hundreds of viruses I downloaded on my computer in my efforts to find this film.

Directed by the wife of Elia Kazan.
Posted by Amanda at 12:01 PM