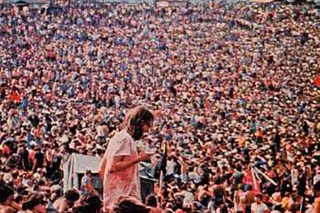 I am currently going through a break up and a bout of laryngitis, neither of which is fun and both of which require ice cream.  Fortunately, we finally came across an enjoyable film.  This is a particularly interesting watch if you are trying to complete the 1001 Album list as well, which I don't recommend to anyone who has a life.

There is not exactly a plot to detail here since the movie mostly just features musical performances, the best of which include Joan Baez (cover your ears for her high notes) and CSN.  I am really not one to romanticize Woodstock, but this was an engaging documentary.  It really makes you wish there was a camera around for other historical moments.  You know, that don't involve presidents getting shot or naked hippies.

The Beatles were invited to perform at the festival but they declined.  John Lennon offered to perform as the Plastic Ono Band.  John, stop trying to ruin my life.

Neil Young refused to be filmed.