The Heiress
1949
Directed by William Wyler 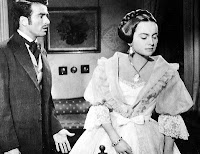 Olivia de Havilland is definitely one of my favorite actresses of all time.  I have mentioned this before but I love that she doesn't need to be the prettiest person in the room during her performances.  This is pretty unusual for actresses during this era (here's looking at you Joan Crawford).  She is fantastic at playing emotionally damaged women.  On a entirely separate and shallow note, I never really care what Montgomery Clift is up to.  He is just so nice to look at.

Anyway, this film is follows Olivia de Havilland, who is a plain spinster who is constantly verbally abused by her father.  Montgomery Clift comes along to woo her because of her large inheritance.  If this was a movie now, he would probably fall in love with her along the way, she would find out about his motives, a sad song would play during their estrangement, then he would make a big speech at the end and they would fall into each other's arms. Spoiler: none of this happens.

In addition to the outstanding actors, you also have William Wyler directing who almost never disappoints.  This film is flawless; even the score is amazing.  Watch it!

Montgomery Clift thought de Havilland was a horrible actress and didn't want to work with her.

Olivia de Havilland won an Oscar for her performance.  Take that, Clift (I really can't get mad at you).