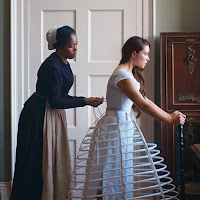 I rarely venture to the theater anymore except in case of emergencies, like if Jordan Peele has a new horror movie or Donald Glover will be featured shirtless. I did see The Beguiled fairly recently, a film that is very similar to this one in terms of themes and style. But Lady Macbeth is vastly superior, so why was I wasted my time with The Beguiled? Oh right, Nicole Kidman.

Trapped in a loveless marriage with a man twice her age, Katherine spends every morning being laced into a torture device (otherwise known as the corset) and every night being used for her husband's pleasure. Suffice to say, she doesn't have much of a chance of producing a heir. This angers her boorish father in law Boris. The only company Katherine has is Anna, her housemaid. Katherine becomes attracted to Sebastian, one of the men working for her husband, things escalate, and let's just say she earns the comparison to Lady Macbeth.

Period dramas often have some pacing issues. I think the director becomes so enamoured with the beauty of the costumes and sets that they forget they have to move the story along. Lady Macbeth is guilty of this, but overall, the actors are able to imbue even the quiet moments with great meaning.

It's always interesting to watch these female revenge tales, which can either horribly gruesome (I Spit On Your Grave) or mistaken for empowerment (Thelma and Louise). Much like the experience of watching Lady Macbeth, acts of revenge are satisfying in the moment, but the results end up making you feel slightly sick.

Based on a novel by Nikolai Leskov.

Only three musical passages in the movie's score.
Posted by Amanda at 6:33 AM