The Shape of Water
2017
Directed by Guillermo del Toro 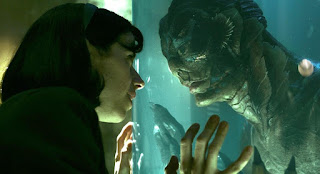 My best friend has been trying to get me to watch this movie for ages, but I have been putting it off. I am not entirely sure why she thought I would like this film so much, and I must remember to grill her about this later. Perhaps she just knows I like cats and was trying to torture me with some of the scenes in this movie. Either way, this was not a pleasurable experience.

Elisa Esposito was found abandoned as a child by the side of a river and is completely mute. She works as a janitor at a secret government facility. She is able to communicate with her two friends, her next door neighbor and her coworker, through sign language. I am not sure how she is able to sign fluently in ASL without having received any education. Surely she would be using house signs and probably not using the ASL sentence structure. Movies really cannot get Deaf culture right. Anyway, the laboratory receives a creature from the Amazon and they of course want to do experiments on it, torture it, and weaponize it. Sally and the creature start to get...frisky with each other.

So I will admit this is a beautifully shot movie, but beyond that, I didn't find anything unique about the characters, who were all rather paint-by-the-numbers good guys and bad guys, or the story, which was a hohum story about how Deaf people can only have true connections with fish. All right, obviously I realize that wasn't the message. But I just didn't find the romance particularly compelling or believable. Apparently her neighbor did, though, and wasn't mad that she flooded his bathroom or that her boyfriend ate his cat. But hey, I'm not a romantic.

Easily skippable and I hope something will break us free from this rut soon.

The look of the creature took nine months to develop. See, mermaids are just like humans!

The creature's design was partly based on a matador.