The Act of Killing
2012
Directed by Joshua Oppenheimer 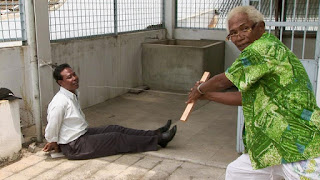 How do you even begin to review a documentary like this? I don't know if I have ever seen anything so perverse committed to film and I really hope I never will again.

Basically, the director asked former death squad leaders to reenact the mass killings they perpetrated in whatever manner they want. They do this in the style of Hollywood gangster movies, musical numbers, and one bizarre scene that looked like an outtake of Flaming Creatures. The film is intercut with some interviews and other footage of Anwar Congo just...living his life.

What a surreal experience, watching these men together. They discussed their killings like they were old friends from high school, reliving their glory days as football stars. They argued over whether one looked good in red or not. Like most people watching, I spent the whole viewing time searching for signs of remorse and never really got any.  There were glimpses, here and there, but were they genuine? It's hard to say. But it's a noble goal to humanize killers. Not for their sake, but for ours. We need to know how easy it is to justify violence and slip into the roles of monsters.

Anyway, that was very upsetting and I have to go talk to some ice cream about this.

RATING: Seems pretty inappropriate in this case. Let's just say it's worth seeing.

49 members of the crew were credited as anonymous, as they feared revenge from death squad killers.
Posted by Amanda at 1:38 PM