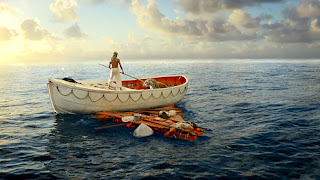 I read this book awhile ago on a transatlantic flight.  I was flying coach and had strep throat.  So much like Pi, I know something about stressful travel situations.  Anyway, the book was amazing but it took prompting from the List to get me to see the film.

Pi Patel, an Indian man who survived a horrific shipwreck when he was 16, tells his story to an author (everyone knows shipwreck stories can only be told through flashback and narration).  Pi was an unusual boy who decided to adopt Christianity and Islam as his religions, in addition to Hinduism, which was his family's faith.  Pi's father owns a zoo and decides to take his family and all his animals to Canada to settle there.  During a storm, the ship founders and Pi escapes on a lifeboat with a wounded zebra, an orangutan, a hyena, and a tiger.

Visually, this is obviously a gorgeous movie, but it has more to offer than that.  At one point, Pi says, "Hunger can change everything you ever thought you knew about yourself."  While I am not religious, let alone triple religious, I have my own tenets, which include practicing vegetarianism and not killing anything (except other people's good times).  It was fascinating watching Pi try to hang on to his humanity in his situation, when we all know it's going to be a losing battle.  It's not a movie like Lifeboat or The Belko Experiment that tries to answer these questions (and in the case of Belko, gleefully revels in its chosen response).  It is a much more personal story and it also has a really cool tiger.  Ahem.

Suraj Sharma was such a compelling actor and I can't wait to see what else he will do.  I don't want to spoil the ending, but I also thought it was brilliant.  And fuck hyenas.

Suraj Sharma only went to the audition to support his brother.

CGI tiger was used for most of the film, but they used a real tiger in the shot of it swimming in the ocean.