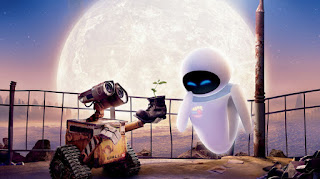 I actually saw this film at a drive-in, which is always a fun experience (you can maximize your snackage without fear of judgement).  I didn't find this quite as heart-warming as the rest of the population, but it was undeniably adorable.

In the year 2805, WALL-E (or Waste Allocation Load Lifter Earth Class) is the last remaining robot on Earth, programmed to clean up Earth so that humanity can one day return.  As is, people have evacuated the planet and live in an automated spaceship, where they spend their time being fat and gross.  One day, WALL-E discovers a healthy seedling (life...uh...finds a way).  Later on, an automated spaceship deploys EVE, a probe, to scan the planet.  There, she meets WALL-E.

Finally, a pro-environmentalism movie that does not include racism!  This is particularly relevant in my country now.  Ahem.

Anyway, did I enjoy the film?  Honestly, I think it would have made a great animated short.  After about an hour, I was ready to call it quits, particularly since it has such a predictable story line.  Still, I know many people will find this touching and uplifting; it's not the filmmakers' fault that my heart is so shriveled and cold.

EVE's longest sentence is three words, while WALL-E's is two.