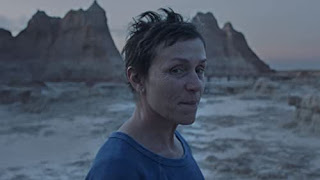 I have once again reached the end of the List, which is something I've now bragged about three times on this blog. When the List comes out with a new update, there will be a fourth time. Honestly, I didn't find any new favorites among the updates, but it was interesting to see what was being created during such a weird time in the world.

In 2011, Fern loses her job after the US Gypsum plant in Empire, Nevada closes, closing the town with it. Fern sells most of possessions and buys a van. She dubs it Vanguard, and roams the country looking for work. She starts to establish relationships with some other nomads, but remains untethered to life.

This is probably the most impressive performance I've seen from the new batch, and it comes right at the end. Frances McDormand is literally in every scene of this movie. She genuinely feels real, not like a Hollywood glamazon who became a size four for the role. I don't know if we had to see her defecate, but I guess that's life in the van.

This reminds me of the documentary on the List Surfwise, which showcased the life of a family of nomads. To me, it feels like a transition to death, and therefore, not something you should enforce on your children.

So until next time! Happy viewing!

McDormand lived in a van for five months to prepare for the role.

Empire, Nevada is a real place that was owned and shut down by US Gypsum.