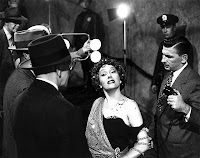 This is probably one of my favorite films, certainly my favorite film noir.  Everything about this movie is flawless: the directing, the acting, and the dialogue.  Add to that, this movie can be genuinely frightening, although I am sure many jaded viewers would disagree.

Gloria Swanson plays an aging silent film actress star who is determined to remain young (think What Ever Happened to Baby Jane?).  William Holden is a Johnny Everyman is a nobody who unfortunately gets wrapped up in her crazy.  The movie starts with Holden shot in the back in a swimming pool and in true film noir style, goes back and fills in the blanks with voiceovers.

When I said the movie was scary, I was not just talking about Swanson's chilling performance (although that picture above is pretty creepy).  The directing is extremely well done, making Norma Desmond's mansion look like a house of horrors complete with a creepy butler.

There is also a certain sentimental aspect that came with watching this movie for me.  Having see so many silent films in my journey, I also felt a pang that that era was over (although I did not lose my sanity over it).

Just a fantastic movie; film noir does not get better than this.  Are we done with film noir with this movie.  Here come the tears!

Buster Keaton did a cameo.